Below are 2 articles from the newspapers, of which one relates to the National Players Hockey Association's Presidents views and the other is that of the Chairman of the Sports Advisory Panel (SAP).

Some may question the wisdom of giving publicity to NPHA's President's view on the matter. The rationale being that the blog is taking a transparent view so as all the 102 former internationals are fully aware of what is happening. We are not expressing any views on the matter other than stating that the former internationals are intelligent enough to know what they are doing. 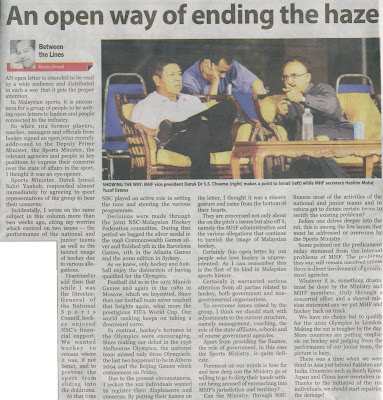 There are other newspaper articles that shall be posted in due course.
Posted by Former Hockey Internationals at Wednesday, August 13, 2008

Great to see what you former hockey internationals are doing for hockey.Keep up the good work.

Even Dato Wira Mazlan acknowledge this open letter is first of this kind in Malaysia sports history.