YB Datuk Ismail Sabri, the Minister of Youth and Sports acted in great speed to meet the Representatives of the 102 former hockey internationals. In a 2 hour meeting on 4th.August, he too was concern where hockey is today compared to the past. He wanted honest opinions beyond what was documented in the open letter.

The 8 former internationals present in the meeting had frank exchanges with the YB Minister. Also present at the meeting was SAP Chairman YBhg Datuk Wira Mazlan Ahmad.

YB Minister in concluding the meeting wanted a proposal from the 102 former hockey internationals within a month. He is as interested as all of us that Malaysia should be a force in World Hockey.

Below is the various newspaper articles of the meeting: 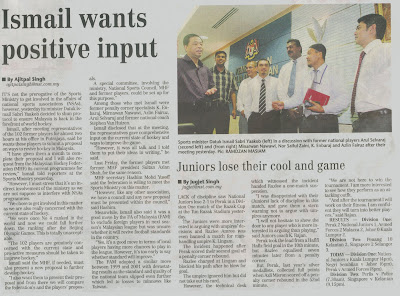 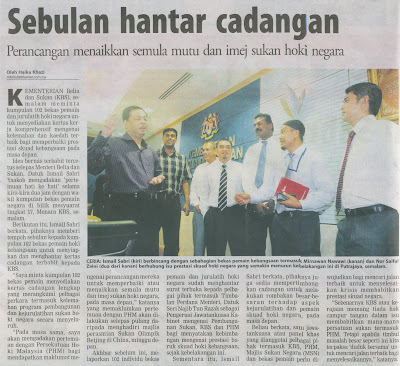 Now the hard work starts and everyone input is vital to the success of the PROPOSAL.

We received an anonymous comment which we had to edit to remove any statements that may constitue as a personal attack.
"Below is the text of the comment: This is my personnal contributions which i sincerely hope to assist in your effort.
i cannot be counted to be 'greats' as you all are but i have been playing and following Malaysian's Hockey for nearly 50 years and i was shocked to see its freefall only this last few years.

There were alot of contributing factors to the decline but one area that is pertinent missing to my unbuyous observation is:

1) Have quality personality manning all strata of the MHF.
Like not having a Gen-Sec who cannot even speak and write proper internationally used language.

4) All official must be competent in operating electronic equipments and not like videoing with the cover on.(it happened in Germany)

Please sepuloh- dua, i will be watching whether you all make this mistakes, if you all do, then woe betide you all.

Proud to know that there re people like you all and do not let nay-sayers throw you all 'off-track' as all of them are 'hanger-ons'.

Its beautiful to see this group of 102 former national hockey players concern about the decline in our national team.

Its first of this kind in our country.

Great stuff and pray you all will succeed in putting back Malaysia hockey back into the world arena.